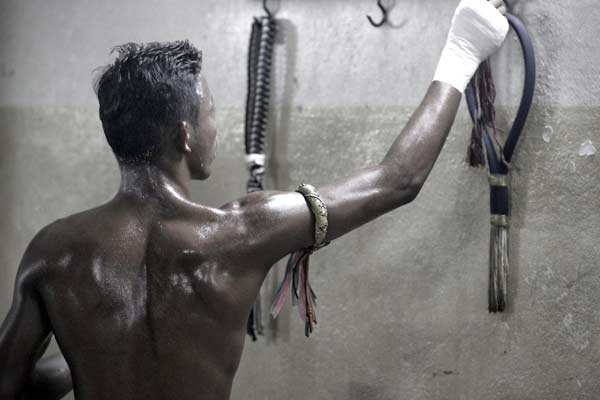 If you’ve had the chance to observe Muay Thai fighters in action, you’ve probably noticed that they all tend to be extremely slim and well-muscled.

This is an intentional achievement because all combatants understand that it is necessary to maintain a slender physique to maximize their performance.

Any novice just beginning the sport will learn this essential fact quickly, and if they stick with the sport for any length of time, they’ll probably find that they, too, have become more slender and much more muscular.

The Reason Muay Thai Fighters Are So Skinny

The primary reason that Muay Thai fighters tend to be so thin is that it helps them have much faster reflexes and contributes to their durability. Things happen lightning fast in this sport, and you need cat-like reflexes to survive and be competitive.

Rather than emphasizing muscle gain as some sports do, Muay Thai participants strive to maintain a low body fat percentage because it helps them perform better inside the ring.

However, just because they’re skinny doesn’t mean they’re weak – combatants constantly work to build up strength so they can deliver powerful blows during competition.

Let’s elaborate on why Muay Thai participants tend to be slim and well-muscled. Below you’ll find some more detailed reasons why enthusiasts of this sport are almost universally narrow and in superior condition.

Maintain a Specific Weight for Your Division/class

Muay Thai contests are coordinated in a manner that pits two combatants of similar skill levels and body types against each other. That means you will almost always be competing against someone who weighs approximately the same as you.

If you should happen to gain three or four pounds before a match, it’s entirely possible that you could be disqualified from the game for being overweight. Most combatants keep a close eye on their weight and do whatever it takes to stay within their most comfortable weight class or division.

Most professional Muay Thai fighters based in Thailand do not have access to a lot of meat and starchy foods in their diet.

Since fighters tend to be pretty poor, they can’t afford to purchase expensive supplements that might allow them to bulk up. That’s why you’ll rarely see a bulky Muay Thai fighter in Thailand because they lack the resources to bulk up.

However, these dedicated fighters can certainly obtain the proper nutrition to maintain fighting strength and the appropriate body profile to become successful.

If you’re unfamiliar with Thailand’s climate, it is hot and humid all year round. That means fighters will burn even more calories during the constant hot weather than in an air-conditioned setting.

Almost anyone will lose weight when training in conditions that remain hot and humid for long periods.

This kind of training also promotes a greater intake of water and other fluids, which in turn helps to flush out toxins and keeps the combatants relatively slim at all times.

Increased muscle mass means decreasing speed for a Muay Thai fighter, which is avoided at all costs.

Combatants with lean physiques have a much better chance of achieving victory simply because they don’t have to move all that muscle around in the ring.

It’s also true that being very slim helps to improve your reflexes and allows you to react much more quickly to events inside the ring.

Most Muay Thai fighters avoid the possibility of adding muscle mass by shunning processed foods and eliminating sugary foods from their diet.

Training sessions for Muay Thai tend to be highly intense, involving every part of your body working in unison. It’s normal for a Muay Thai fighter to burn over 1,000 calories an hour during hard workouts.

Experienced fighters usually have two training sessions daily, each lasting between two and three hours. Expending energy at that rate becomes a simple exercise in Math – they are burning more calories than they’re taking in.

It often becomes necessary for veterans to load up on their favorite meals to maintain their fighting weight.

Are you a skinny Muay Thai novice?

Muay Thai can help you lose those pounds and become closer to your ideal weight if you are a few pounds overweight.

However, if you’re already on the slim side, you don’t have to worry about getting scarecrow-thin.

Remember that you’ll be taking in a lot more calories when you’re training, which will offset the intensity of your workouts and the calories you’ll burn.

Many questions are asked about the sport of Muay Thai and how to condition yourself best to be prepared for competition. Here are some of the most common questions, along with their answers.

Q: What’s the best way to condition my shins?

A: There’s no better way to get your shins ready for competition than to kick things repeatedly. That will toughen up your shins and prepare you for serious combat.

Q: How do I get better at sparring?

A: The best way is to find someone at your level or slightly better at your local gym. Then arrange to have sessions together as often as you can manage.

Q: What should my diet be like when I’m training?

A: You should include many carbohydrates, proteins, fresh vegetables, and unprocessed foods. Include plenty of rice in your diet, and avoid junk food, even as snacks.

Q: Should running or jogging be part of my training program?

A: Absolutely. Running is excellent for cardio enhancement, and you’ll need superior cardio functions if you’re going to be competitive in Muay Thai.