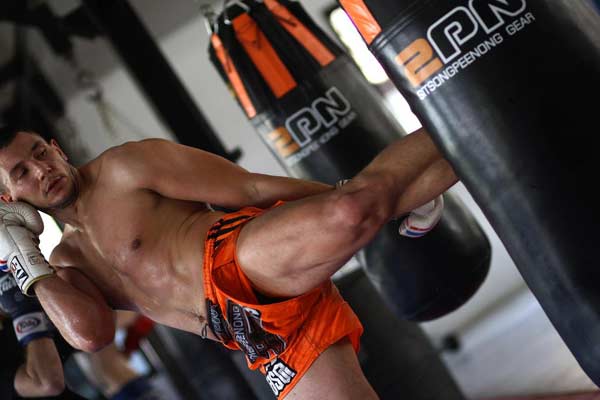 There’s a great deal involved with learning the ancient art of Muay Thai, so it makes sense that it would take quite a while to learn the sport and how to practice it with any degree of mastery.

Some fundamentals that must be learned include the proper stance, how to clinch effectively, and basic punches, knees, elbows, kicks, and combos.

In addition, it will be necessary to have a thorough understanding of the defense and how to avoid getting mauled in a competition.

Continue reading below to find out what must be learned in each of these areas before you can become somewhat proficient in the art of Muay Thai.

Mastering the art of Muay Thai

Most students can understand the basic movements of Muay Thai within three to six months. However, mastering the sport can take longer, most likely several years.

Like any other art form, learning the fundamentals is essential in the beginning, so you can proceed to become an expert in each area.

Given that several moves must be mastered, you can expect to practice for several years before finally becoming good at this form of martial arts.

This will be the first lesson you get from a Muay Thai instructor. Everything in the sport proceeds from this stance, so you’ll need to master it before improving in any other area.

Begin with your feet approximately shoulder-width apart and your front foot a little forward of the other.

One thing to avoid is a flat-footed stance because this will inhibit your ability to throw kicks and punches and leave you more vulnerable to being struck solidly by your opponent.

Punches are one of the most important aspects of Muay Thai, so don’t be surprised if you find some aspect of energy is included in almost every class during the beginning.

To execute a punch correctly, it must be more than a simple arm swing – your whole body must move in unison to create maximum force behind the point. Referred to as the ‘kinetic chain,’ this forward momentum makes punches so effective in the sport.

This is another area that you’ll find receives heavy emphasis during the initial months of your training.

There are two basic types of kick: the front kick and the roundhouse. Front kicks are executed by first lifting the knee, and then your foot quickly follows to strike your opponent with the bottom of the foot.

The roundhouse is the most powerful move that can be made in Muay Thai. In a roundhouse kick, begin by turning your front foot slightly. Then, your torso and hips move together, and your knee gets elevated so you can deliver a sweeping kick to your opponent.

Delivering an elbow punch to an opponent is just as technical as fist punches. You can use many different types of elbow blows, but the most commonly used ones are horizontal and slashing.

Both types are intended to cause severe damage to an opponent, but horizontal blows are designed to achieve a knockout and a victory. Slashing elbows are more likely to wound an opponent and make it difficult for them to continue in the match.

Believe it or not, this is one of the most challenging moves in all of Muay Thai to master, often requiring years of practice before becoming proficient.

The most common type of clinch involves grabbing your opponent’s head and drawing it into you.

This makes it impossible for them to deliver any effective blow while in this position. Clinches are used primarily to interrupt the action, consider your next move quickly, or change your strategy.

Once you’ve learned all the basic moves, you’ll have the option of combining them during competition to make them much more effective. There’s no way for an opponent to predict what kind of combo you might use, so they often come as a surprise.

The beauty of using combos is that they can be devastating in terms of their effectiveness at reducing your opponent’s performance and ability to continue the match.

Defense is probably the single most important technique for you to master in the sport of Muay Thai. That’s why you’ll focus on it somewhat during every training session.

You must learn how to keep your hands up to block punches, as well as how to block incoming kicks and elbows. If you don’t master these fundamentals quickly, all the strikes you might deliver won’t have much real value.

Several questions are frequently asked about what it takes to master the sport of Muay Thai. Here are some of the most commonly asked questions and their answers.

Q: How can I make this move better?

A: Whenever you learn a new move in Muay Thai, it takes a while to master it. Your instructor can point out ways to perform any recent move better, and then you can put them into practice.

Q: Will this move work for me?

A: Your instructor will be aware of your strengths and weaknesses and can advise you on whether or not it will be helpful for you to use it in competition.

Q: Why is this move so effective?

A: Your instructor can explain the purpose of every move you learn. Once you know that, it will help you visualize internally, leading to better technique.

Q: What kinds of drills will help me to improve my technique?

A: There are always drills that can be practiced to improve your overall execution. Ask your instructor about each move you make and what you can do to improve it.

Q: How can I prepare for the competition?

A: Many beginners ask this question, and the best answer is that you must keep practicing devotedly so that after you have mastered the basic moves, you’ll be ready to compete as a novice.