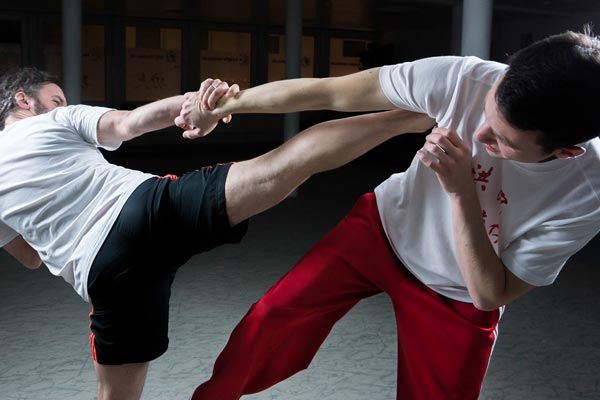 Two of the most recognizable names in modern martial arts media, Kung Fu, is a staple both of the martial arts as a fighting form and China’s most significant cultural donations to the world. Kung Fu is worldwide and world-famous, not only with thousands of schools teaching various styles but a showcase in popular culture.

Muay Thai is Thailand’s premier sport and one of its leading cultural attractions. It’s famed not only in modern cinema but in combat rings around the world. Watch this YouTube video for Sanda vs Muay Thai

Kung Fu comes in all shapes and flavors for anyone looking to take up the martial sport. The Chinese styles range from slow, deliberate thought-full movements like those found in Tai Chi to hard-hitting power-focused Hung Gar.

The Shaolin style of Kung Fu enjoys worldwide fame, thanks to the efforts of the movie media, which heavily featured the famed training and fighting style.

The influence on the culture is such that it even heavily influenced the hip hop world. Its greatest champions being the rap group Wu-Tang Clan and even famous singers like David Lee Roth from Van Halen would perform Kung Fu during his performances.

The martial arts’ biggest claim outside of its renown for combat is its use in movies. Heavily featured in Hong Kong cinema and embraced by Hollywood, the combat form has been seen in countless films and used by actors to keep in shape and overall better health.

The main question is how it performs in real life, what kind of training a person can expect, and how it would perform against a sport combat focus like Muay Thai.

First, the Kung Fu world is so vast a particular style has to be picked and compared directly. The most similar style that can be compared would be the Kung Fu style known as Sanda.

Sanda is a modern interpretation of traditional Kung Fu styles. It takes from each style what it considers most effective and employs it for itself. The Chinese army created Sanda, and they made a sports version of it. The fight itself combines strikes, locks, takedown, and submission.

The combat seems more akin to complete contact, MMA fight than just a specific sticking or grappling match. The fighters are organized into weight classes and fighters’ records.

China made a significant effort for it to be included in the Beijing Olympics. However, it is still in consideration with sports like Pankration and others vying for the coveted spot.

Sanda was known initially as Sanshou, and it translates as free fighting. Its curriculum includes boxing strikes but consists of a back fist. Its knees and elbow strikes cover the horizontal, vertical, and diagonals.

Its kicks focus on forwarding powerful movements and include front thrust kick, front snap kick, side kick, spinning back kick, roundhouse, and ax kick. Then it contains throws like hips, shoulder, and takedowns, both double and single leg.

These skills can be learned quickly with a hard training style within a year or a year and six months. To completely dominate all the skills included does take some time since after learning the main fighting techniques for Sanda, many like to branch out of particular Kung Fu styles to complement their fighting style.

There is a belt system in place for those looking to expand beyond the basics that range from white to golden Duan.

The training for Sanda is challenging, with exercises focused on developing speed and power. The more dynamic and none traditional forms of training. So, less time focused on forms and more time sparring.

A typical day can include high-energy calisthenics, powerlifting, technique work, and then sparring. The outcome for a student training in Sanda can be compared to an MMA fighter instead focuses on Kung Fu styled training.

Sanda can is the natural progression in Kung Fu. Gone are the mystical ideas and myths set forth by tradition, and the focus becomes practicality and use. Its history is much like Muay Boran to modern Muay Thai since they both take from their traditional forms of martial arts and become a sport to entertain the masses.

However, both are included and have their interpretation in their respective militaries.  Sanda does not have a traditional ranking system like its Kung Fu counterparts rather places an emphasis on fighting.

Muay Thai is Thailand’s premier combat sport. It combines various forms of traditional martial arts from Thailand; called Muay Boran initially, the combat sport focuses on striking and in one of the features of the main styles and teaches in the world of MMA.

The combat sport is regarded as one of the most effective for both real-life situations and combat sports thanks to the simplicity of its movements.

A student seeking to learn Muay Thai will see a short curriculum that will focus on striking, teach them the basics, and then emphasize sparing, lots and lots of fighting.

The curriculum is fast enough to get the hang of the basics within eight months to 1 year. Then the student will hone those skills through conditioning and fight practice.

Muay Thai places a lot of emphasis on these two particular fronts, body conditioning, and cardio health. The proper training sees the fighter become accustomed to pain and pain management.

The rigorous heavy bag work will deaden the nerves of the shins and other extremities to allow the fighter to push his body.

The conditioning does not stop at the legs and knuckles, and a fighter will see himself be put through a punishing workout that will test his willpower. These might include defensive scenarios where the fighter cannot hit back father avoid and block.

The Muay Thai student quickly becomes proficient in the combat system; this training system has no actual ranks associated with it. The style honors a practitioner’s fighting prowess and lets the fighter’s record speak for itself.

The students will learn boxing strikes, jab, cross, hooks, and unorthodox overhand. The elbow is one of its primary weapons and sees diagonals, horizontals, angled, and spinning variations. Kicks include round, straight, spinning.

The knee is one of its more powerful weapons combined with the clench and as a stand-alone weapon. Muay Thai does have take-downs, but they are more focused on tripping and throwing than actual grabbing.

Sanda seems to China’s answer to Muay Thai, as it looks to dismiss all the critics regarding its usefulness in real-world scenarios.

The styles have more in common than opposed, and students looking to increase their arsenal could benefit from cross-training in both techniques. Keep in mind both are punishing martial arts and will focus on a fighter’s will to finish.