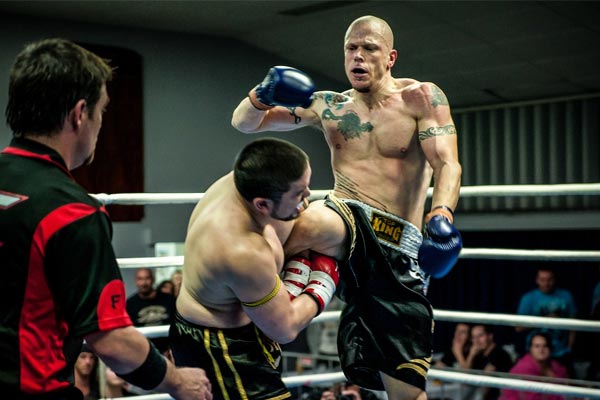 Muay Thai – is a Thai martial art that aims to turn you into a deadly weapon. It uses every part of your body to deliver lethal strikes to your opponent, from your fists to your feet and your knees to your chin.

On the other hand, the Israeli Krav Maga – relies on your physical aggression and whatever else you can get your hands on to help you survive. It consists of blows, kicks, strikes, holds, and anything else that can help hinder your opponent.

Krav Maga vs. Muay Thai: Which Martial Art Should You Train For?

Krav Maga and Muay Thai are extremely popular and effective street combat sports, and as an MMA newbie, you might be enticed to choose both.

While Krav Maga is one of the most lethal martial arts, Muay Thai holds the record for having the highest strike-to-injury ratio.

However, which one will assist you in kicking ass in real time?

Krav maga vs. Muay Thai: To find out which style wins, let’s start from the start.

The Basics of Krav Maga

This official self-defense system of the Israeli Defense Forces (IDF), dubbed “The Art of Staying Alive,” is a deadly tactic of survival that has become an essential part of military training programs worldwide. Krav maga may appear complicated, but it is a self-defense art focusing on practical moves tailored to real-life scenarios.

Is Krav Maga Ideal for Beginners?

To be competent in krav maga, you don’t need any belts. However, it does keep track of the fighter’s progress via the six belts and eleven dans.

The six belts are yellow, orange, green, blue, brown, and black in ascending order. A black belt is the sixth belt level, divided into five sub-levels.

How Long To Reach A Blackbelt in Krav Maga?

From the beginning to the end, here’s a rough timeframe for achieving Krav Maga’s pinnacle.

In Krav Maga, for a trainee with average fitness and training thrice a week, reaching level 6 takes at least 3 1/2 years. But that’s just the beginning; each Dan level requires a minimum of 5 years, i.e., 15 years, to reach Dan 5.

The main goal of Krav Maga is to incapacitate your opponent before they can react or counterattack. You are encouraged to be aggressive, efficient, and quick.

Even though Krav maga draws on various martial arts, it consists of three moves: strike, hold and block. There are no rules in this game. You work with your impulses rather than training and use whatever moves you think will get the best results.

Concentrate on striking the weak spots

Krav maga forces you to memorize your opponent’s most vulnerable points—which inflict enough pain to render your attacker unconscious quickly.

When your life’s on the line, the motto is ‘kill or be killed,’ and there is no such thing as etiquette. Face gouging, neck strikes, and groin kicks are all permissible.

Objects within reach are weapons.

You can use anything you can get your hands on to achieve your ultimate goal: survival.

That’s why objects within your reach can be used as a weapon in krav maga. Everything from knives and guns to sticks and keys is on the table.

To achieve faster results, you can, for example, hold your opponent while continuously striking.

The goal is to overwhelm the attacker with a constant barrage of aggressive and hostile movements. This well-known and highly efficient drill is the Reztev Drill.

The Basics of Muay Thai

Muay Thai may resemble kickboxing in appearance, but if a Muay Thai fighter is pitted against a Kickboxer of comparable experience, the Muay Thai fighter will always win. Muay Thai is known as the “art of eight limbs” because it employs a variety of deadly knee, elbow, and even chin attacks in addition to kicks and punches. This makes it an incredibly efficient and deadly martial art form to master!

Is Muay Thai Ideal for Beginners?

Yes! It is safe for beginners under a certified coach. All you need to get started in Muaythai is some inspiration and the proper training equipment.

According to the U.S. National Library of Medicine, Muay Thai fighters are more likely to be injured in combat than other MMA fighters, particularly at the beginner level. This is mostly due to incorrect movements, so you should seek a certified coach.

Muay Thai has traditionally lacked a belt grading scheme. A warrior begins with an arm belt, also known as a prajed, and works his way up to championship belts and titles.

The World Thai Boxing Association came up with the idea for colored armbands, which are more for inspiration than professional ranking. From beginner white to instructor black gold, you can earn 13 armbands.

How long till you Reach a Black Belt in Muay Thai?

The traditional ranking is determined by talent, fighting record, victory performance, and the number of championship belts and titles.

Achieving the equivalent of a “black belt” should take approximately a decade of training and one-on-one combat experience under you.

Defeat the threat. By being in control

According to the International Federation of Muaythai Associations, Each Muay Thai move is a well-planned strategy honed over years of practice. The correct Muay Thai stance and strict rules keep you on your toes and force you to remain calm even in dangerous situations.

Muay Thai helps you be in command and ready to slow down attackers and unleash attacks.

Muay Thai entails converting the body into a lethal weapon through a series of well-planned assaults, i.e., your best suit against their weakest.

The diagonal knee, for example, includes striking the enemy’s diaphragm with the bone of your knee, and the teep kick involves kicking the ball of your foot to the rival’s neck, abdomen, and face.

Muay Thai teaches you to focus on turning every part of your body into surprising & strategic weapons. The rules ensure you prove your mettle without putting your opponent at an unfair disadvantage.

Your body is your weapon

Our body can be a strong weapon, and Muay Thai recognizes that. Your elbow, shins, and knees are deadly when you strike them in the right spot with the right movement, strength, and accuracy.

While kicks, punches & knee/elbow strikes are great offenses, Muay Thai has some specific defenses- like teeps and clinchers- focused solely on disrupting your opponent’s attack while building your offense.

Krav Maga vs. Muay Thai: The Big Similarity Self Defense

Muay Thai is a Thai martial art that aims to turn you into a deadly weapon. It uses every part of your body to deliver lethal strikes to your opponent, from your fists to your feet and your knees to your chin.

On the other hand, the Israeli Krav Maga relies on your physical aggression and whatever else you can get your hands on to help you survive. It consists of blows, kicks, strikes, holds, and anything else that can help hinder your opponent.

Krav Maga vs. Muay Thai -Whatever your choice, be prepared to turn your body into a lean, mean fighting machine!